How was the opening of Parliament celebrated in Melbourne?

Opening of the Commonwealth Parliament in Melbourne

Procession through the city

Ten minutes later came another cheer, and a second fusillade from the guns, and then, amid enthusiastic cheering, the head of the Royal procession came under the Commonwealth arch and thundered over Princes bridge. The Duke of Roxburghe, conspicuous in the striking uniform of the Royal Horse Guards, rode well ahead of, followed by the suite and escort proper of Victorian Mounted Rifles, New South Wales Lancers, New Zealanders, Queenslanders, South and Western Australians and Tasmanians, under Major Vernon, New South Wales. The now familiar scarlet-coated, tall hatted Royal outriders followed, and then came the Royal carriage, with an side-trotting on either side. H.R.H. the Duke of Cornwall and York wore the uniform of a rear admiral in the navy. As the Duke and Duchess drove through the city, the troops, section after section, came to the “present,” while at all the important corners and turning places, the chief arches and best point of view, the enormous concourses of people rose and cheered and waved hats, sticks, handkerchiefs and umbrellas with the greatest and warmest enthusiasm. As the Royal progress proceeded the evident affection and loyalty of the Heir apparent.

Gentlemen of the Senate and Gentleman of the House of Representatives…

His Majesty has watched with the deepest interest the social and material progress made by his people in Australia, and has seen with thankfulness and heartfelt satisfaction the completion of that political union of which this Parliament is the embodiment.

It is his Majesty’s earnest prayer that this union so happily achieved may under God’s blessing prove an instrument, for still further promoting the welfare and advancement of his subjects in Australia, and for the strengthening and consolidation of his Empire.

Gentlemen of the Senate and Gentlemen of the House of Representatives, it affords me much pleasure to convey to you this message from his Majesty. I now, in his name and on his behalf, declare the Parliament open.

As the sound…reverberated through the building, her Royal Highness pressed an electric button which started a message to England announcing that the first Federal Parliament had been opened.

Message from the King

"My thoughts are with you on to-day’s important ceremony. Most fervently do I wish Australia prosperity and happiness." EDWARD R.I.

"I have just delivered your message, and in your name declared open the first Parliament of the Commonwealth of Australia. I also read your kind telegram of good wishes, which is deeply appreciated by your loving Australian subjects, and was received with great enthusiasm. Splendid and impressive ceremony, over 12,000 people in Exhibition Building."

As soon as the applause which followed the reading of the King’s message subsided Lord Hopetoun, the Governor-General, stepped forward and said:–

Citizens arch welcoming the Duke and Duchess of Cornwall and York to Melbourne, May 1901 Decorated in warm fresh tints relieved with gold, the Citizen’s Arch gives strength, finish and added beauty to the ornamentation of Bourke street. It is erected just east of the Russell street intersection…On the towers are medals, one representing the six States, together with embossed portraits of the Duke and Duchess. In the centre of the arch figures the portrait of his Majesty the King…

The Duke of Cornwall and York opening the First Commonwealth Parliament, Melbourne, 9 May 1901 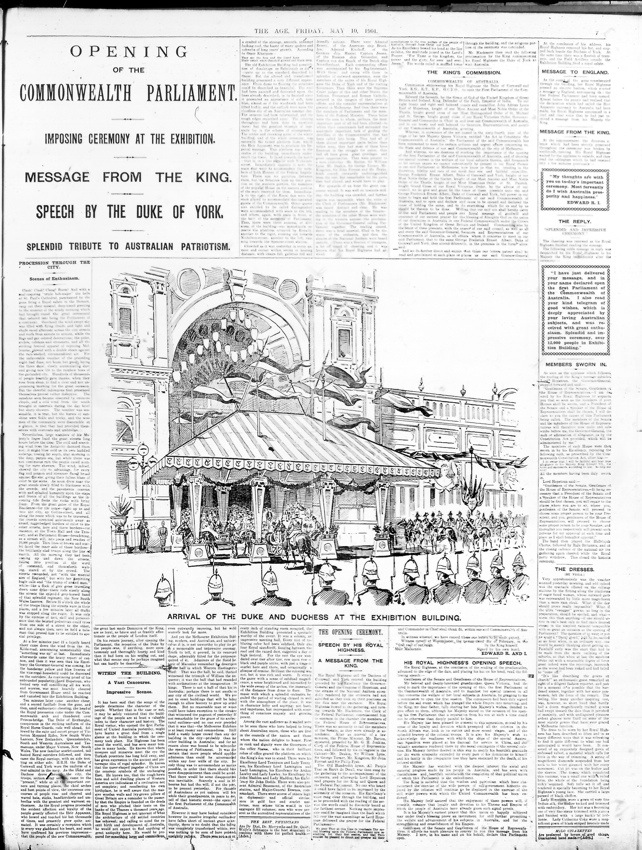 Invitation to the celebration of the opening of the first Commonwealth Parliament of Australia, 1901 Extract from the Australian Constitution, section 2

A Governor-General appointed by the Queen shall be Her Majesty’s representative in the Commonwealth.