How did the Democracy expand in the colonies during the time of Federation?

Arguments for and against women’s suffrage

GENTLEMEN—
I beg to inform you that I pay the Land Tax under protest—I object to being taxed whilst I have no vote. Men are not taxed without representation, why then should Women be so unjustly taxed, seeing that they are in need of the protection of a vote far more than men?

Who ordained that men only should make the laws to which both men and women have to conform? Why should half of the world govern the other half?

The suggestion that women are equal to men is absurd. They are as inferior mentally as well as physically.

How can you give women equal political rights with men, and, at the same time, preserve the unity of the home as we have known it? If you tell me the wife is to exercise her intelligence and independence as a voter, then you cannot have the unity of the home. If you tell me she will not thwart her husband, then I say the whole thing is a make-believe. It would be sad and strange if a woman, having given everything else to a man—having merged her life in his—could not trust him to express her political views, which, after all, is only a small part of social life.

Speech by Mr Henry Wrixon in the Victorian Parliament, 1898 cited in John Hirst, The Sentimental Nation. The making of the Australian Commonwealth, Oxford University Press, 2000.

1st – Because it is their right.
2nd – because I feel assured they will use the privilege wisely and well.
3rd – Because they so intensely desire it.
They will use their power to advance public morality, to protect woman’s kingdom – Home, to shield the weak, to denounce the wrong, and in every way uplift and enoble the individual and the nation. They desire it because they are part of the nation, bound by its laws, taxed by its Government, responsible for its welfare. Allowed to share the burdens, yet not allowed the one privilege of voting. They desire it now because they are powerless to protect their homes or children with the vote they would have a voice in making laws for their own and their family’s defence. They desire it because it will place them where God placed them – side by side with woman’s noble partner, man. A help-meet indeed.

…having more than they can do well in all that appropriately belongs to them, to add evil and political duties of men, would be unjust and oppressive.

If we gave women the vote, the result would be that women would give more attention to politics and political questions, and less attention to their social duties and the comforts of their homes.

Nineteenth century civilisation has accorded to women the same political status as to the idiot and the criminal. Such is the basis of our reverence for the person of women and of our estimate of her work.

Just out of reach 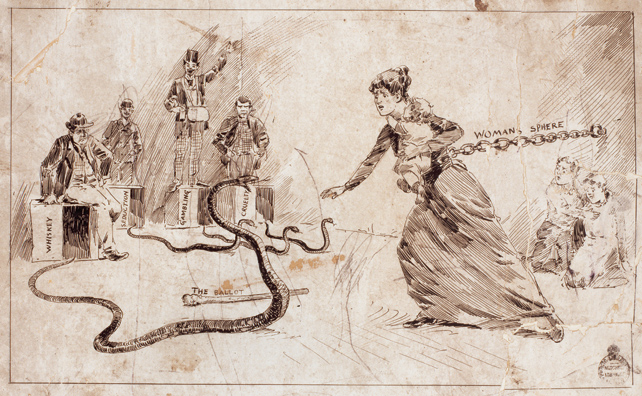 Here, you man! Where’s that vote you promised Me? 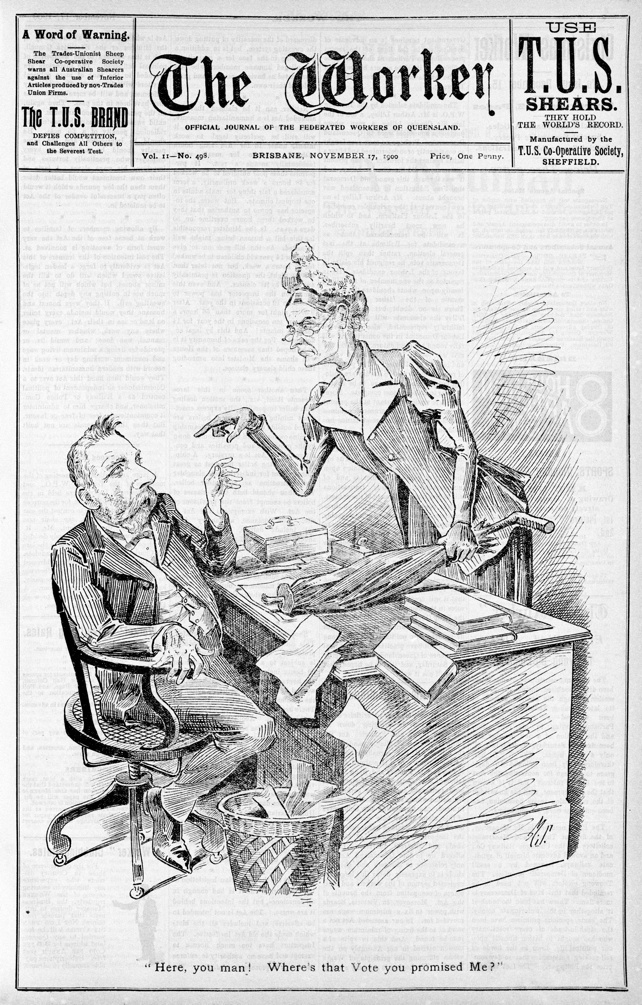