Who were some of the prominent figures on the road to Federation? 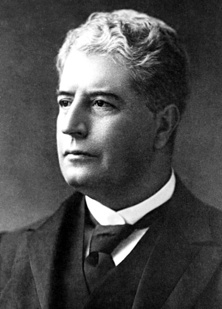 Edmund Barton was born and raised in Sydney. He was a good student in secondary school and university. By the age of 30, he was a lawyer and a member of parliament.

Like many other people born in Australia, he was keen on the plan to form an Australian nation. He became the leader of the Federation movement in New South Wales, travelling the colony to give speeches and organise supporters. On this issue, he had found his calling.

Barton was the dominant figure of the 1897–98 Federal Convention. He was in charge of getting the words in the Constitution right and after each day’s debate, he worked through the night while the other delegates slept.

He became so admired and trusted that the leading politicians in the other colonies wanted him to be the first Prime Minister. He was Prime Minister from 1901 to 1903, and then he retired and became a judge on the new High Court.

In June 1898, on the eve of the vote to decide whether or not the Australian colonies should federate, Edmund Barton wrote an open letter to the local newspaper. He did not speak as a political leader, but rather as an ordinary citizen, about the nation’s future happiness and that of its people being dependent upon voting in favour of Federation.

One word, I may, however, add as your fellow elector. New South Wales is my native colony—it is my home. It is the birth-place of my children…In voting for the Bill, I am committing myself, and the happiness of my children, to the Australian future. You do no less, but you do no more. 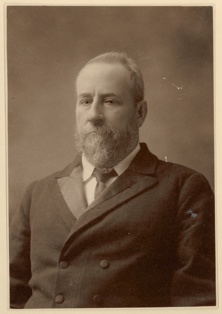 Charles Cameron Kingston was a lawyer. In politics, he was a radical, and impatient with those opposed to democratic reforms. He challenged one of his opponents to a duel with pistols and was arrested by the police. In court, the magistrate ordered him to keep the peace for 12 months. But, this did not stop him becoming Premier.

He was a great supporter of Federation. Apart from insisting that the small States must have the same number of senators as the large States, he wanted a democratic Constitution for the Commonwealth. He believed that all people, men and women, should have the vote. He argued strongly that the upper house (Legislative Council) should not block the people’s wishes represented in the lower house, as it did in South Australia.

Kingston was Minister for Trade and Customs in the first Commonwealth ministry under Edmund Barton. This was an important post, since he had to steer through Parliament the new tariff duties, which were to replace those of the colonies. He also drew up the Bill for the Arbitration Court that was to settle workplace disputes, something he had pioneered in South Australia.

In a letter to the people of South Australia, Kingston encouraged voters to vote in favour of Federation, and warned them against further delay as the consequences of such action would only lead to increased intercolonial differences.

What patriotic Australian can desire to see a further postponement of the accomplishment of Federation…I have penned this letter that at least it may not be my fault should they fail to realise the great possibilities of the position and the dangers which may result from their neglect. But neglect would be a crime against Australia, and I cannot seriously contemplate its probability. 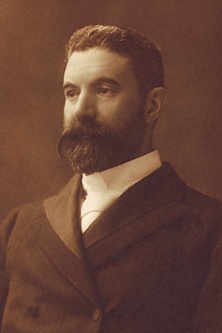 Alfred Deakin was the second Prime Minister of Australia. He led the Federation movement in Victoria. Only Edmund Barton worked harder to create the new nation of Australia.

Deakin was born in Melbourne in 1856. He became a lawyer and wrote for The Age newspaper. Deakin was clever, handsome and a wonderful speaker. He entered politics at the age of 22, became involved in the Australian Natives Association and was very soon the leader of the reformers in the Victorian Parliament. Though he was an excellent politician, he kept thinking he would give it up and become a writer or a preacher.

Deakin was keenly interested in spirituality, and was involved with a number of different spiritual groups and churches throughout his life. He felt that God wanted Australia to be a nation and that he was doing God’s will in working for Federation.

Deakin was Prime Minister from 1903–04, and then from 1905–08. He was a protectionist Prime Minister and, with the support of the Labor Party, he encouraged Australian industry with tariffs; set decent wages for workers through the Arbitration Court; and planned an Australian navy. As Labor grew stronger, he combined with all other non-Labor politicians in 1909 to form the Liberal Party.

At an Australian Natives Association banquet in Bendigo in March 1898, Deakin addressed the crowd directly after Victorian politician Isaac Isaacs had spoken about his reservations regarding the draft Constitution. Making his most famous and most celebrated speech, Deakin spoke to the Australian Natives Association members as one Australian to another. His speech received rousing support. Noting the high level of support for Federation, other prominent Victorian politicians then campaigned in its favour.

At a time like the present this association cannot forget its watchword—Federation—or its character, which has never been provincial. It has never been a Victorian, but always an Australian Association. Its hour has now come…Every branch should be stimulated into action, until, without resorting to any but legitimate means, without any attempt at intimidation, without taking advantage of sectionalism, but in the purest and broadest spirit of Australian unity, all your members unite to awaken this colony to its duty… 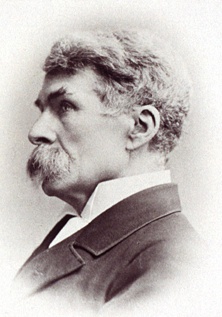 Edward Braddon was born in Cornwall, England. He migrated to Tasmania in 1878 and settled at Leith on the north-west coast. He entered the Tasmanian Parliament the following year and was Premier of Tasmania from 1894 to 1899.

Premier Braddon was especially clever at making sure government money was not wasted. The money was used to build important roads, harbours and railways. To help raise money for Tasmania, he even arranged for Tattersall’s lotteries to be set up.

When Federation was being discussed, Braddon was very keen for Tasmania to join, but not if it would disadvantage the colony. He was concerned that Tasmania could lose the money raised from the customs taxes they had always collected on imported goods. The Tasmanian Government counted on getting this money and desperately needed it. The plan for Federation was that the new federal government would collect all the customs taxes and keep the money for its own needs.

Braddon was a Tasmanian representative at the Federation Conventions and upset some of the other delegates when he insisted at the last moment that the federal government give three-quarters of the customs money back to Tasmania and the other States. Those who did not want the Commonwealth to raise a lot of money through customs called it ‘the Braddon blot’. However, he won the argument, and Tasmania received this important income for the next 10 years.

Edward Braddon was elected to the first Federal Parliament in 1901, when he was nearly 72 years old. He still holds the record for being the oldest person to enter the House of Representatives.

On the eve of the first referendum on whether Tasmanians should join the proposed Commonwealth of Australia, Braddon wrote a letter published in the local newspaper. He spoke about his vision for the future and the benefits that Federation would bring to all Tasmanians.

…the opportunity will be presented to you of casting your vote for Australian Federation, and so helping forward that great movement, which, if reason prevail, will make this small colony an integral portion of a nation and a sharer in all of the advantages that will flow to every province united under the Constitution Bill in the Commonwealth of Australia. 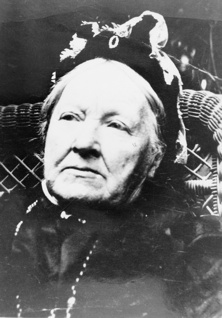 Catherine Helen Spence was born in Scotland on 31 October 1825. Her family migrated to South Australia in 1839 after the failure of her father’s business.

In Adelaide, Spence became a writer. Her novel Clara Morison: A Tale of South Australia During the Gold Fever was the first novel set in Australia to be written by a woman. Spence later turned her attention away from fiction and wrote for various newspapers and magazines. As a journalist, Spence wrote about social issues and politics in Australia. In 1859, she became a strong campaigner for a proportional representation voting system to be introduced in Australia.

Spence formed the Effective Voting League of South Australia. She addressed several public meetings and conferences in Australia, the United States and Britain, promoting proportional representation. Public speaking on such a scale was highly unusual for women at this time.

In 1891, Spence also took a leading role in the campaign for women’s suffrage. She became Vice- President of the Women’s Suffrage League of South Australia. When South Australian women were granted the right to vote and stand for election in 1894, she went on to support similar campaigns in New South Wales and Victoria.

Catherine Helen Spence was the only female candidate to stand for the Federal Convention in 1897. While she was unsuccessful, coming twenty-second out of 33 candidates, she had become a leading example for women in Australia.

As a social reformer, Catherine Helen Spence was concerned with a wide variety of issues. She was most concerned with the issues of voting and democracy and voting rights for women. She advocated that women should have the vote for the Commonwealth Parliament.

the grand democratic basis of the Commonwealth constitution of ‘one man one vote’ needs to be expanded into ‘one adult one vote’…While half of the human race is shut out from public activities, no one can call the government really democratic.