What were the issues surrounding Federation for South Australians?

Federation will not help

It has already been admitted that Federation will crush a number of manufacturing industries, throw the men employed out of work, and generally reduce the standard of wages. I ask what advantages the producers are to gain. Our chief lines are wool, wheat and copper, the market for all of which is at the other end of the world. Federation will not help the farmer and the grazier. The dairyman may rely on suffering loss. …Far more Victorian butter will be sold in South Australia than South Australian butter in Victoria.

A general feeling of insecurity

In the first half of the year 1882 Europe was in a most unquiet state…and a general feeling of insecurity prevailed in those colonies where defences did not exist or were insufficient. This colony felt the infection, and Sir William Jerois, our then Governor…suggested the acquisition of a warship…

General Edwards had also advised that the forces of the various colonies should be federated for operation in unison in the event of war so as to act as one great federal army. If an attack were made upon any of the colonies, it might be necessary for us to bring all our power to bear on one spot of the coast.

The great question which they had to consider was, whether the time had not now arisen for the creation on this Australian continent of an Australian Government…to preserve the security and integrity of these colonies that the whole of their forces should be amalgamated into one great federal army… They had now, from South Australia to Queensland, a stretch of about 2,000 miles of railway, and if the four colonies could only combine to adopt a uniform gauge, it would be an immense advantage to the movement of troops.

Part of one great system

All these rivers are part of one great system. I am now attempting to combat the proposition laid down by [New South Wales Premier] Mr. Reid that there should be no joint control over any river unless that river ran beyond the borders of any one colony… They are no more the rivers of New South Wales in that sense than the sun which warms them belongs to New South Wales, or the air which sweetens them is the air of New South Wales…

No claim on the river question

New South Wales, so far as the Rivers Darling and Murray were concerned, could have been pumped every drop out of them, and in fact the waterworks officials of that colony had propounded schemes which would have done that. They had no remedy against that now. It was the legal right of New South Wales. Until they federated… [South Australia] would have no claim on the river question.

About the Northern Territory

Relief from the burden

South Australia at present submits to a loss of £70,000 per annum in relation to the Northern Territory ... We might avoid this by disposing of the Territory… [South Australia] is content to abide the loss until a United Australia takes charge of the Territory and relieves us of the debt and responsibility in the interests of all. Mutually satisfactory terms would not be difficult to arrange, and when arranged South Australia may be fairly credited, as a result of Federation, with the relief from the burden which she now cheerfully undertakes in trust for Australia and in the interests of posterity…

All to gain from Federation

It requires no elaborate article to discover to readers that we have all to gain from Federation and nothing to lose. Under a United Australia the Territory must obtain those many adjuncts to advancement which South Australia has denied her. There can be no two questions as to the effect of Australian unity upon the Territory, hence there should be no hesitation as to how Northerners should vote.

About the nation’s capital

Why not Port Augusta?

…what of South Australia’s geographical position…why not Port Augusta?

Reaches into the heart of Australia

Every development of the resources of Australia, every step that is taken towards the federation of the colonies only hastens the proud day when Port Augusta must become one of the queenliest cities of the south… [a city] situated at the head of the waterway which reaches into the heart of Australia; the town which is the point at which the railways to and from WA, NT, Queensland, New South Wales and Victoria must meet. Must become mighty, flourishing and important… [it] is destined to become the emporium of the vast interior.

Rank the issues in order of importance from 1 to 5; with 1 being the most important. Provide a reason for this ranking. 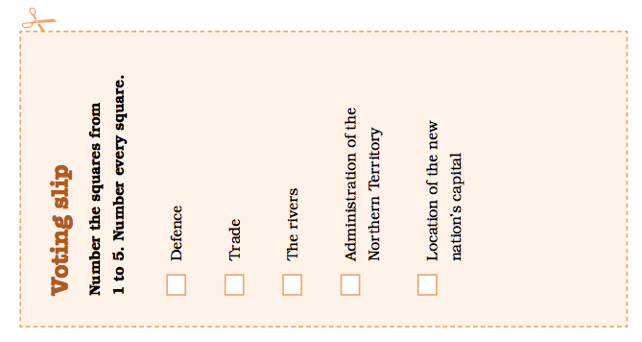