How was the opening of the first Commonwealth Parliament celebrated in Melbourne?

Celebrations for the opening of the first Parliament of the Commonwealth of Australia, Melbourne

Welcoming the Duke and Duchess of Cornwall and York

Australia united yesterday in welcoming to her shores the future King and Queen of the British Empire… The people rejoiced in the proclamation of the Commonwealth. It was to them their own nation’s birthday, and was honoured as an occasion fraught with untold possibilities… The consummation of Australian unity was the work of our own people, the concrete expression of their own aspirations, and the reward of their own sustained efforts.

The spectacle in the streets

The arches rose over the great masses of the people in the gorgeousness of their colours like so many rainbows set against a cloudless sky. The senses were whirled away with the bewildering spectacle, and for moments together buildings, people and arches alike were blended in a dizzy hundred-tinted wave of colour.

The great feature of all the arrangements made for the reception of their Royal Highnesses was undoubtedly the Municipal Arch on Princes bridge… The arch is in the early Renaissance style architecture… three masts in the centre, supporting giant banners… The arch measures 90 feet across the road… On the southern elevation there are two inscriptions… “The City Hails Her Monarch…s Son” and… “The Wattle Greets the Rose of York” …On the reverse… are the Tennysonian mottoes, “One Life, One Flag” “One Fleet, One Throne”…

It stands in Swanston street just north of Flinders lane, rising to a height of 60 feet… At the summit… are five ornamental pierced openings, surrounded on either side by shields bearing the King’s crest… [The covering] is of cardinal and old gold velveteen, richly broken into panels with gilt mouldings, with diagonal silk cord forming diaper work.

At the intersection of Collins and Russell streets, the loftiest point in the route of the procession, a magnificent bronze statue of the late Queen Victoria looks down from the arch which bears the name of the wise and good Sovereign who ruled over the destinies of England for over sixty years… The decoration is in delicate tints of violet, picked out in pure white, silver and gold.

…in Bourke street, between Elizabeth and Swanston streets… [The Duke’s arch has] handsome photographs of the Royal visitors, and their exalted destiny is represented by the overshadowing crown which is appropriately supported by a golden cupid… The primary features of the arch are outlined by 400 electric lights.

The Victorian Chamber of Manufacturers is to the fore with a beautiful monument on the corner of Collins street and Exhibition street. At the top of the lofty column is a figure supporting the globe… Emblazoned around the globe and on the pedestal are messages of greeting.

The Butter Arch, in Collins street, between Market street and William street, by no means came up to the original expectations, but at least it served to advertise an important industry.

Decorated in warm fresh tints relieved with gold, the Citizens’ Arch gives strength, finish and added beauty to the ornamentation of Bourke street. It is erected just east of the Russell street intersection… On the towers are medals, one representing the six States, together with embossed portraits of the Duke and Duchess. In the centre of the arch figures the portrait of his Majesty the King…

The German Arch, or portal, that adorns the Block in Collins street, is in the German Renaissance style of architecture and consists of two elegantly-designed columns… [that have] been “Australianised” by the introduction of a lyre bird in the capitol… The metrical translation of the inscription is “One People We, United and Fraternal”.

The Chinese Arch in Swanston street, near Little Bourke street, is of course distinct in style… It is of the Pagoda character, two towers flanking a central span rising 45 feet high… the heavily bell cast imitation tiled roofs… and creatings so characteristic of Chinese art, realise an effect particularly striking and not displeasing.

Procession route for the opening of the first Parliament of the Commonwealth of Australia: Government House to Royal Exhibition Building 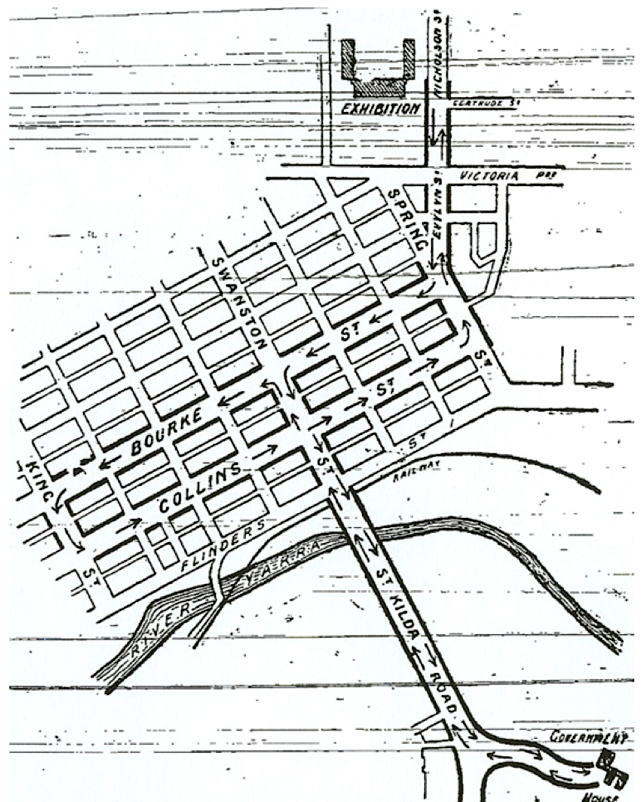 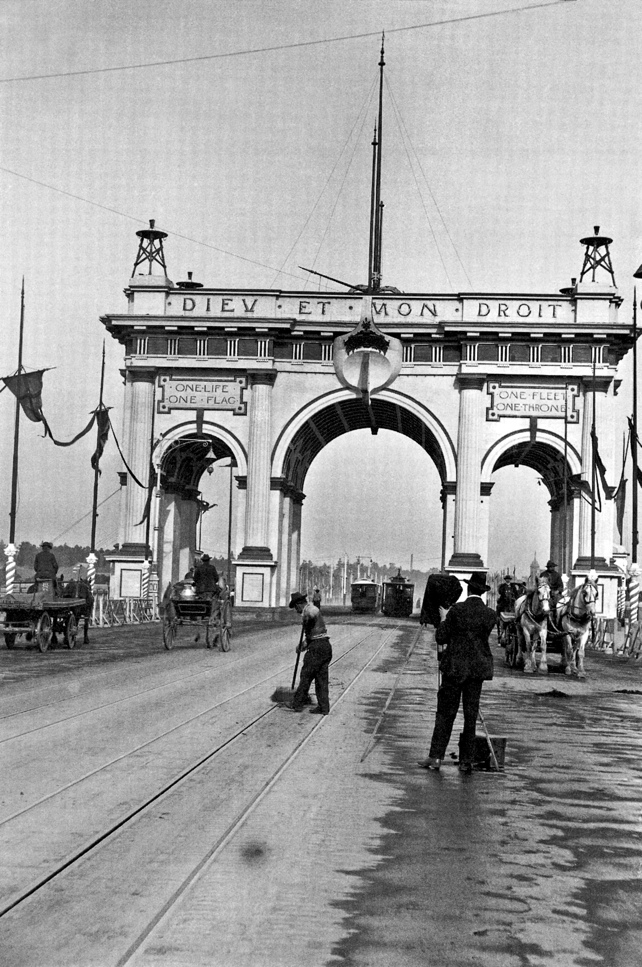