How did Western Australians outside Perth celebrate Federation?

Federation celebrations around the state

Fremantle began on Monday evening to celebrate the foundation of the Australian Commonwealth and the opening of the new century. On that day a procession through the streets, followed by a concert on the Oval, constituted the programme. Yesterday the festival was continued… Fremantle has seldom seen a more effective picture. Marching four and five abreast three thousand boys and girls of all sizes paraded some of the principal streets. Nearly everyone carried a small flag… The children sang patriotic songs, and cheered and, of course, talked as they walked, whilst thousands of interested spectators looked on and returned the cheers.

The Commonwealth celebrations commenced here with midnight services conducted at various churches. Addresses suitable to the occasion were delivered. At half-past 9 a procession of children was marshalled at the Town Hall, under the superintendence of Mr. Reilly, chairman of the committee, and Mr. Dalton, Town Clerk. Being provided with flags and banners, the children presented a gay appearance as, headed by the Northam Brass Band, they marched to the station, where they were entrained for Burralong Pool, three miles distant. Mr. Reilly addressed them, explaining the meaning of the gathering, and calling for cheers for the Queen and the Commonwealth. On arrival at the grounds a programme of aquatic and other sports was entered into, great interest being centred in the competitions on the water…

After a thoroughly enjoyable day had been spent the return journey was safely made. A “continental” concert was held during the evening on the recreation ground, short speeches being delivered by various prominent men on “The Day We Celebrate.”

The Commonwealth celebrations today were very successful. An athletic and aquatic sports meeting was held on the banks of the Avon. The council gave a picnic to the children, assisted by ladies, the funds being granted by the Government. The day was beautifully fine, though hot, and there was quite a representative gathering from all parts of the district. The proceedings were enlivened by the York Band, with an excellent programme of music.

Although this place exhibited strong anti-Bill predilections on Referendum Day, there was no lack of enthusiasm about to-day’s Commonwealth celebrations. Indeed, on no previous occasion has such warmth and unanimity of feeling been displayed here. The proceedings started with services at the various churches this morning… a procession started from the railway station, and marched to the new Recreation Ground. At the head of the procession was Police-Inspector Holmes and mounted police, followed by the Geraldton Mounted Infantry; then came the Geraldton Volunteer Band and Geraldton Rifles; next followed about five hundred school children… When the Recreation Ground was reached addresses were delivered by the Mayor… and Resident Magistrate… After the singing of… the National Anthem the children were given lunch. In the afternoon sports were held, the attendance at the Recreation Ground being the largest ever known at Geraldton.

Results of the Federation referendum 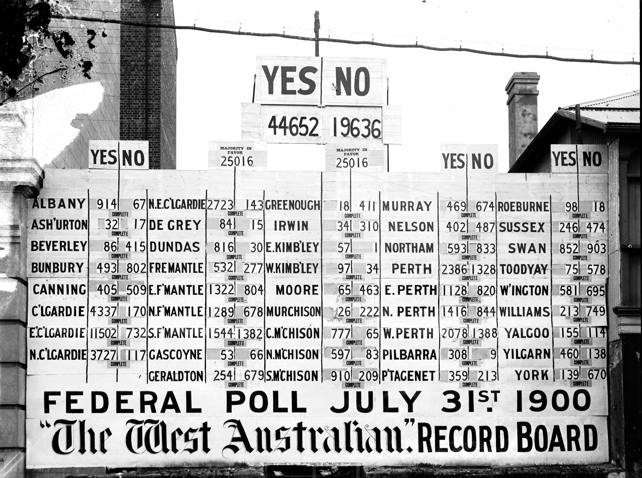