Who was John Forrest, and what were his contributions to Western Australia? 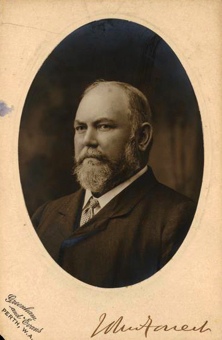 John Forrest was born to Scottish migrants in Bunbury, Western Australia, in 1847.

Forrest began working for the Surveyor-General’s Office in December 1865. In 1869, he led his first expedition to find the remains of the failed 1848 Liechhardt exploration. Throughout the early 1870s, Forrest led a number of other expeditions. His confident leadership style and careful forward planning brought him recognition throughout Australia and Britain.

In 1883, Forrest became Surveyor-General and Commissioner of Crown Lands, and was appointed to a seat in the Legislative Council. He became increasingly involved in politics and developed strong beliefs about how Western Australia should be governed. In December 1890, he was elected to the Legislative Assembly for the electorate of Bunbury, and became Western Australia’s first Premier soon after.

Forrest was involved in the Federation debate from the beginning, representing Western Australia at the Federal Conventions in the 1890s. While he supported Federation and was pressured into agreement from the large gold mining population, Forrest faced opposition from the farming community, which believed Federation would bring increased competition and costs. True to his leadership style, Forrest took time to convince the electorate of the benefits of Federation, and tried to obtain a better set of conditions for Western Australia to join the other colonies in Federation. Forrest was successful in his bid for Western Australia to keep its tariff on imports for a period of time after Federation. But, his wish for the colony to be divided into separate Senate electorates, and for the building of an east–west railway across Australia were unsuccessful. Forrest encouraged Western Australian voters to accept Federation at the referendum in 1900, as it became apparent that the other colonies would federate without Western Australia.

I cannot help having a leaning towards federation, but I am not a federationist on any terms. I am only a federationist if it is possible to have federation with advantage to Australia and to this colony… Everyone wants to be federated, but we do not want to pay too much for it.