How was Federation celebrated in Brisbane? 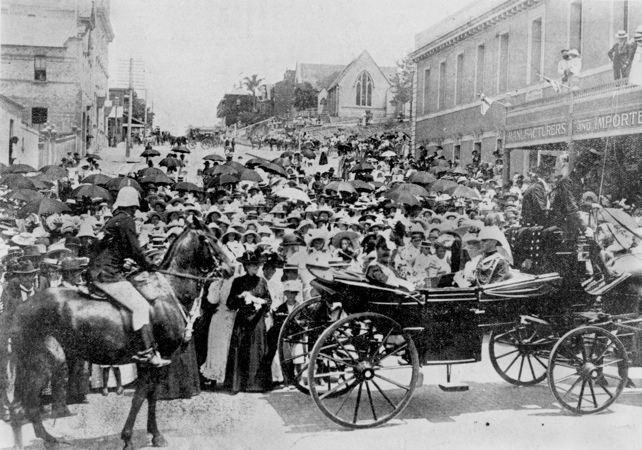 Map of Brisbane showing streets and locations during the Federation celebrations, 1901

The scene in Brisbane

The time appointed for the general muster at the Treasury Buildings and along Williams Street, back towards Parliament Buildings and Alice Street, was from 8.30 to 9.30 a.m. Shortly after 8 o’clock spectators began to group themselves at various points of vantage, and gradually the gathering swelled till dense crowds almost blocked the way at the intersection of William and Queen Streets, and at the four corners of George and Queen Streets.

The fine architectural features of the Treasury Buildings had been most artistically set off with dressings of palms, ferns, &c., while flags, tricolors, and other appropriate bunting hung here and there, and served to gaily decorate the porticos and windows facing Queen and William Streets…

When the reading of the proclamation and the offering of prayer had been completed the children’s choir, numbering about 300…sang the National Anthem…The procession proceeded along Queen Street, halting at Wharf Street, where, on arrival of his Excellency’s carriage [Lord and Lady Lamington], a larger choir…sang “Rouse Australia”…the procession, a mile long, proceeded along Queen, Wickham, and Brunswick Streets, to the Exhibition ground.

The night display in the Botanical Gardens [in Brisbane] was on a grand scale. The programme as drawn up was:—Commencing 7.30 p.m.: Botanic Gardens illuminated with coloured lights and Chinese lanterns: band performances, new bandstand, by Naval Brigade and Sandgate Town Bands, amalgamated (34 performers), and Queensland Rifles Band, 8.30 till 10 p.m.; H.M.Q.G.SS. Gayundah and Paluma gave a rocket and coloured light display; Pain’s fireworks—set pieces, &c., under the supervision of Mr R. Motherell, on Kangaroo Point, opposite Gardens.

The actual proceeding of the day may be said to have commenced at the Treasury Building, where his Excellency the Governor read the proclamation of the Queen establishing the Commonwealth.

‘We, therefore by and with the advice of our Privy Council, have thought fit to issue this our Royal proclamation, and we do hereby declare that on and after the 1st day of January, One Thousand nine hundred and one, the people of New South Wales, Victoria, South Australia, Queensland, Tasmania, and Western Australia shall be united in a Federal Commonwealth, under the name of the Commonwealth of Australia.’

In the decorations which marked the joy of yesterday the shipping in port lent considerably to the general effect, every craft, from large liners like the Jumna down to the usually dingy-looking municipal ferry boats being bright with bunting. Main buildings along the waterside, offices of shipping companies, &c., also were well decorated with flags and greenery. The public buildings in the city were centres of attraction, because of the efforts which had been successfully made to render them picturesque, and the General Post Office was particularly noticeable in that respect. Here the pillars were festooned and garlanded with wreaths of colour, with strings of Chinese lamps, flags, &c. The Custom-house was everywhere strung with red, white and blue draperies, set off with strings of lamps, flags, greenery, and shields. The Treasury Buildings were, of course, the main feature, as it was here that the principal ceremony of the day was performed, and there could be no more handsome or effective ornamentation than that lent by the bright costumes of the ladies who filled every available window and doorway of the building.

Even before the appointed hour the general muster, preparatory to the procession commenced in William-street. The marshalling of the various units was undertaken by the police officers…

Some 300 children, who had been drawn up on the steps leading to the Treasury Buildings, sang the National Anthem…and immediately after a floral presentation to Lady Lamington was made. A body of neatly-uniformed mounted police, headed by Inspector White, took up the van of the procession, and immediately behind them came the Vice-Regal carriage.

The Foresters…had a strikingly-arranged group showing Robin Hood among his merry men of the Sherwood Forest. The display which excited most admiration, however, was that of the Australian Natives’ Association. In it a figure of Britannia occupied the central position, having on either side female figures representing Australia and Canada, while the British lion crouched at her feet. Other emblems of the Empire on which the sun never sets also formed part of the display. The Hibernian Society’s banner was drawn by a fine team of horses, ridden by postillions in green silk tunics, the whole making a most effective display.

Not the least attractive feature of the procession was that formed by the Fire and Ambulance brigades, two bodies of men whose services are of inestimable value to the community. The two-horse reel of the Metropolitan Fire Brigade was there, with Superintendent Hinton and a full crew “on board.” There was also a one-horse reel from the South Brisbane Fire Station.

An Australian demonstration would not be characteristic unless there were sports and so it came about that arrangements were made for the gathering which took place yesterday at the Exhibition Grounds, Bowen Park. Towards this rendezvous the procession travelled, and on arrival the military and members of the A.N.A. were marched into the grounds…

In the Exhibition Grounds everywhere was life and bustle, the refreshment stalls, side shows, and other features of an ordinary sports meeting being present, while in the ring itself a full and most interesting programme of sports was seen under way.